Dell XPS 15 9550 was the most problematic device for me

After research I’ve found that not only me is struggling with this device, and after having experience with two 9550 i7 4k I suspect that this device was released in hurry without proper QA and probably because of that Dell has introduced a successor 9560 what as far as I know didn’t inherit problems of predecessor.

I decided to have one due some reasons:

After having this deice almost 1 year, I wouldn’t buy 4k display, Windows and Linux have problems with supporting HIDPI and LowDPI displays at the same time (link).

In many cases I have to double verify if the problem it’s not me. I mean I have highly customized system, like custom shell, own entries in system PATH, some tools what I use day by day.

This issue was present when display was dimmed, it was pretty annoying at night, so that a comfortable work wasn’t possible. Fortunately this issue has been fixed with some of the recent BIOS update.

So when I started to see that PC randomly freezes I did reinstall, then I did Linux installation, then I started to search on the Internet if somebody has the same problem. Apparently yes, many of people. In most cases people were pointing on SSD Samsung drivers, nVidia GPU or WiFi card. Unfortunately symptoms weren’t exactly how they described. Most typical example for me was watching YouTube video, then any IO stopped to work but video was playing nice, when the video went out of buffer it stopped to play.

The problem was that, when I plugged it headset (any jack device) the right channel wasn’t playing. I had to use a file to expand a hole, so that any pressure was applied on jack and I started to play a sound correctly on both channels.

After having all of above you can imagine my frustration, fortunately when I asked Dell on FB what to do, they helped me. So my warranty repair included:

System was stable, but something wasn’t 100% perfect. I’ve started to hear a noise like form old HDD. Sanity check in Device Manager – Yes, I do have SSD still. I started to find a source of it, my first suspicion was GPU – the noise was more intense when displayed signal was changed. Later I identified that as Coil Noise, what again wasn’t something new for this device.

I hesitated to contact support, and probably I wouldn’t, but they contacted me regarding to my last repair, asking if everything was OK. I explained that everything works, but noise. Fortunately they replaced my motherboard again.

It was a while from my last problem with Dell, in meantime I’ve bought WD15 USB-C 180W docking station, and for a while I used a notebook in shell mode (the lid closed, an external screen attached and set as main display). When I opened the lid of notebook I’ve found this: 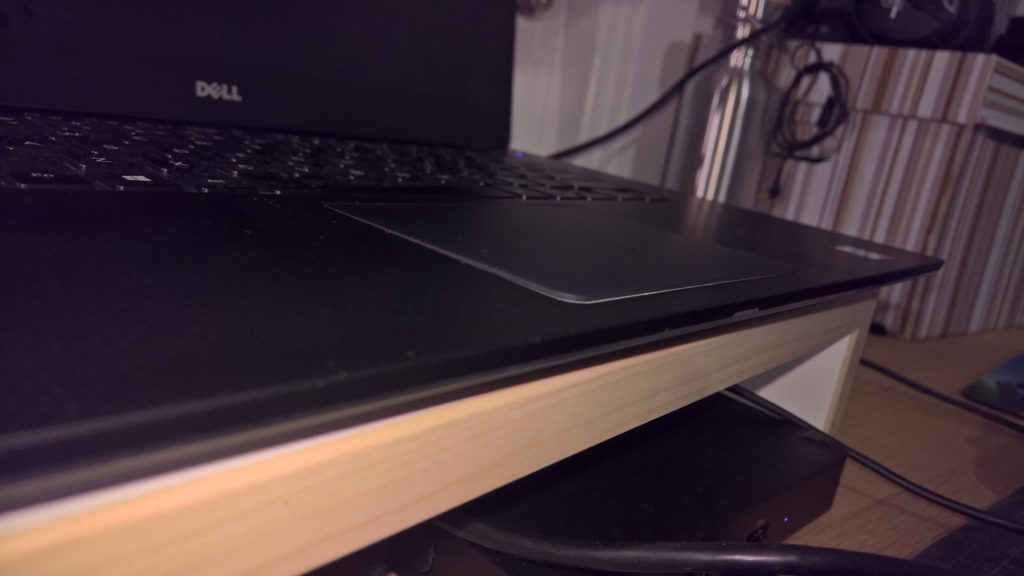 “Most likely it was too hot, and the device’s case has deformed” – I thought, It wasn’t be a big deal, but the touch-pad buttons stopped to work. So I contacted Dell support one more time and occurred that it’s not just a touch pad, it’s a swollen battery. Pretty serious problem. ATM: I’m waiting for this issue being repaired, right now there is a problem with getting a service part.

Since I’ve bought the device 10 months ago it was needed to replace:

This leads to the Ship of Theseus paradox, and probably I can say that I have different device from one I bought. But this post isn’t about paradoxes. Swollen battery, freezes, flickering are common problems for XPS 15 9550, in my opinion this model should never be released with such components and QA process should discover those problems before production.

Those problems made Dell to introduce 9560 what looks the same, has almost the same high-level configuration. Almost, because it has different battery (wounder why) and different secondary GPU (nVidia 1050M). If somebody is thinking about buying 9550 (either on sale or from second hand) I’ll strongly oppose it. Probably it’s better to buy XPS13 or 9560.

Fix for random freezes caused by CRITICAL_PROCES_DIED on Window 10